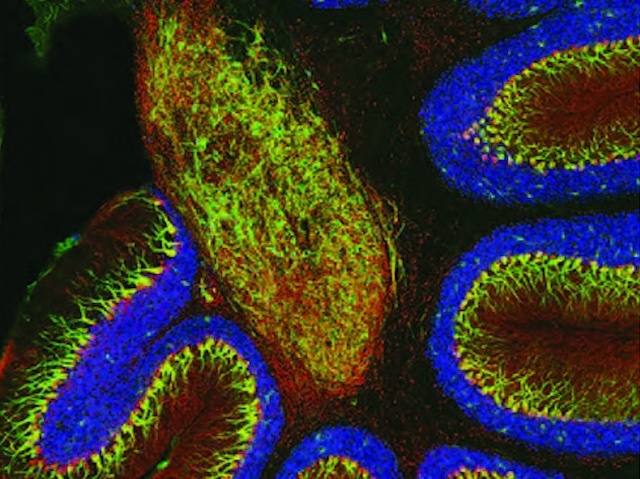 How the sacsin gene mutation of ARSACS, a rare inherited disease, underlies the associated neurodegeneration

ARSACS – Autosomal recessive spastic ataxia of Charlevoix-Saguenay – is a rare inherited neurodegenerative disorder that first manifests as difficulties in walking during early life, and subsequently expands to a range of symptoms and ultimately reduced lifespans. It's caused by a mutation in a gene that produces a very large protein, sacsin, which has proved too unwieldy to easily study. In a new approach, researchers examined the effect of removing sacsin. They confirmed that without sacsin, filament-forming structures (yellow in the mouse cerebellum pictured) accumulate – a feature of many neurodegenerative disorders. They also discovered features such as disruptions to tiny cellular transport tracks, called microtubules. With this network damaged, brain cells couldn’t control the internal movement of essential material, and failed to properly communicate with each other. Revealing such mechanisms in rare conditions like ARSACS could lead to new treatments, and to better understanding of more common disorders too.