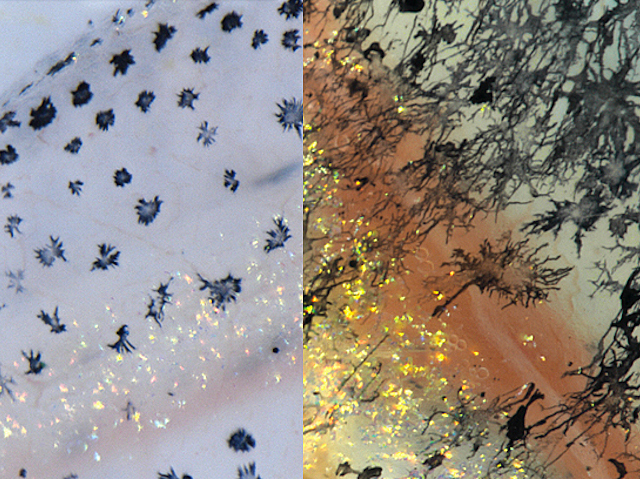 Whatever your skin colour, melanocytes are responsible for it. These special skin cells can also give rise to Spitz neoplasms, growths first described by Sophie Spitz in the 1940s, that can be cancerous melanoma, or non-cancerous. Telling the difference between the two visually is challenging. However genetic studies revealed that Spitz melanomas contain specific genes that have fused together. Now researchers create a zebrafish model using one of these gene fusions. In developing embryos, the fusion caused both non-cancerous and cancerous Spitz neoplasms. In adults where the gene fusion was introduced into melanocytes, there were more melanocytes that appeared abnormal but no melanoma. Next, the researchers blocked the production of a known tumour suppressor in melanocytes. This alone didn’t affect melanocytes – the black starry shapes seen by bright field microscopy (pictured, left) but combined with the gene fusion caused abnormal melanocytes (right) and melanomas. This model can therefore mimic both non-cancerous and cancerous Spitz neoplasms for future studies.