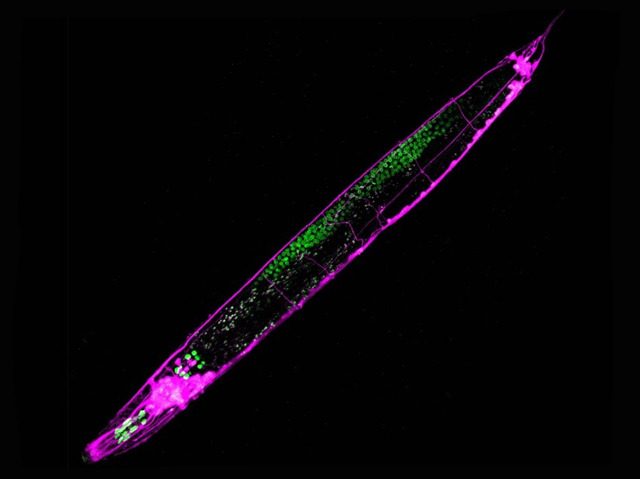 The environment in which we live changes us, but how these changes can be passed on to offspring is one of the enduring mysteries of evolutionary biology. An unlikely creature, the roundworm Caenorhabditis elegans, pictured, may be the key to understanding the mechanisms of this epigenetic inheritance. Small RNA molecules, or dsRNAs, are known to be able to block the expression of specific genes, effectively silencing them, in response to environmental factors. Recent research in C. elegans has shown that this silencing can be passed on to offspring: dsRNAs silencing genes in the worm’s neurons [nerve cells] (in pink) can move to its reproductive cells (in green), and silencing can thus persist for over 25 generations. Researchers hope to use this mechanism to develop gene therapies; despite the obvious differences between us and the roundworm, this first evidence of cross-generational silencing hints that long-term, stable treatments could be possible.