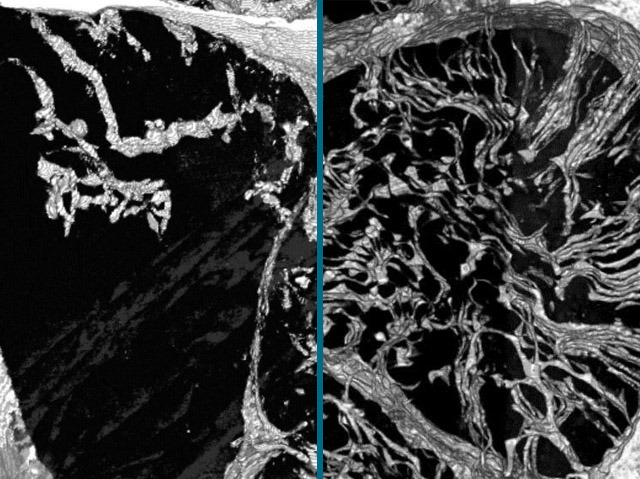 If a heart attack doesn’t kill a person, it’s likely subsequent heart failure ultimately will. A heart attack, or myocardial infarction, damages some heart cells so much that they never fully resume proper activity, causing the heart to eventually fail. Examining the nature of such damage may help researchers find ways to prevent, reverse, or circumvent the problems. One recently identified way in which infarction causes damage is via the destruction of T-tubules – structures that transmit electrical impulses across the cell to coordinate its contraction with that of its neighbours. State-of-the-art electron microscopy has revealed that while T-tubules are arranged radially in healthy heart cells (like the one pictured on the right), in a damaged cell (left) the T-tubules are largely lost and those that remain are clumped together. Finding a way to restore proper T-tubule function in damaged hearts could ensure they keep a regular rhythm for longer.