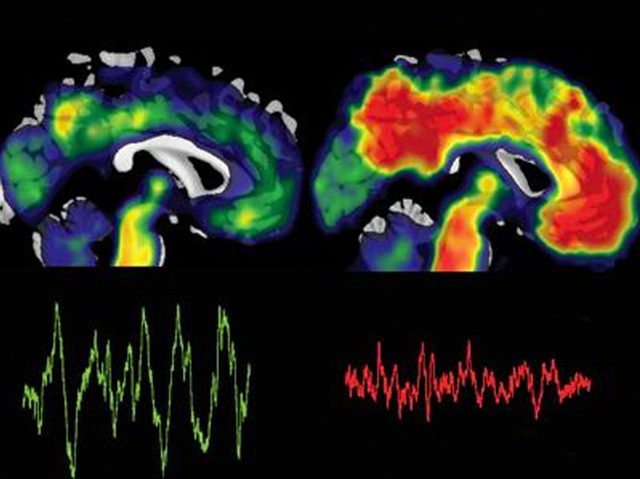 Deep restful sleep is well known for promoting memory consolidation and learning. That’s why pulling an all-nighter to cram for exams is inadvisable. But what if a person’s own brain was disrupting their deep sleep and thus their ability to remember? Well, new research suggests that might be what’s happening in the brains of Alzheimer’s patients. Compared with a healthy brain, such as the one on the left, the brain of an Alzheimer’s patient (right) displays a characteristic build up of amyloid protein (red). Scientists are fairly certain this protein drives the cognitive decline associated with the disease, but exactly how has been uncertain. It’s now been discovered that amyloid accumulation interferes with the particular type of brain wave activity associated with deep sleep. This short wave activity is thought to be necessary for memory formation, and thus its absence might explain the forgetfulness and confusion that Alzheimer’s patients experience.