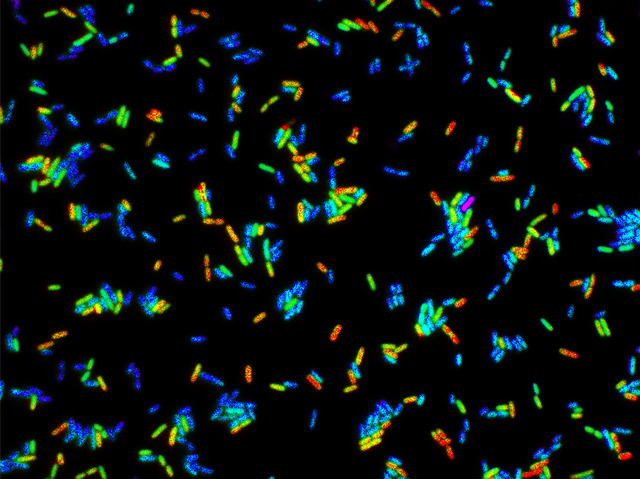 Salmonella bacteria cause millions of cases of food poisoning each year. Like many bacteria, Salmonella species can form biofilms – where the bacteria aggregate together in a thick extracellular matrix, or goo. Biofilms make the bugs more resistant, persistent and ultimately more virulent – in short: more difficult to kill. A bacterial protein called cyclic-di-GMP regulates biofilm formation, but it’s not known what regulates this regulator. To find out, researchers have developed a fluorescent sensor that tells them when cyclic-di-GMP levels go up or down. In the confetti-like Salmonella pictured, for example, the cells glow red when cyclic-di-GMP is low and turn yellow, then green, then blue as levels rise. Using this sensor, scientists have discovered a number of molecules that promote production of cyclic-di-GMP, including one that was particularly potent: the amino acid L-arginine. Interfering with the L-arginine to cyclic-di-GMP pathway to prevent biofilm formation could be a novel antimicrobial strategy.