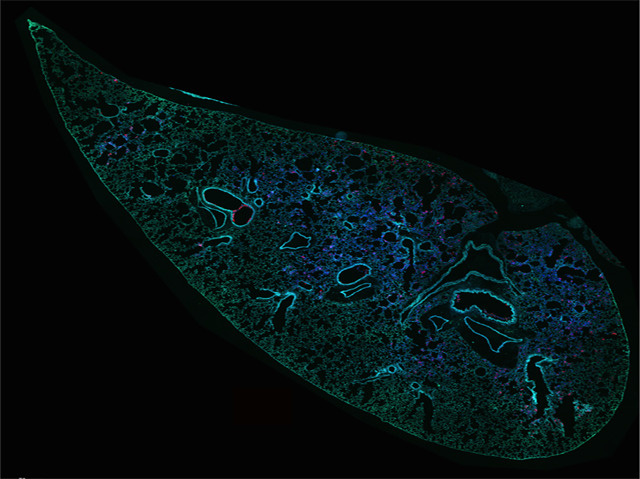 Hospital-acquired pneumonia is caused by the bacterium Pseudomonas aeruginosa. It can be fatal, especially if the bacterium escapes through the lungs into the bloodstream. How P. aeruginosa did this was a mystery until recently. The bacterium injects a protein called ExoS into the host’s white blood cells, which stops them from engulfing and destroying the intruder. Now, we know that ExoS is also injected into the cells lining the lung later in the infection. Scientists made slices of mouse lung, such as the one here, and stained the cells that had been injected with ExoS blue and those that hadn’t green. Bright blue spots show where many cells lining the lung have been attacked, and some killed. Here the barrier between the lungs and the blood has been weakened, allowing the bacteria to escape through. Hopefully this discovery will help us develop a treatment to make hospitals even safer.