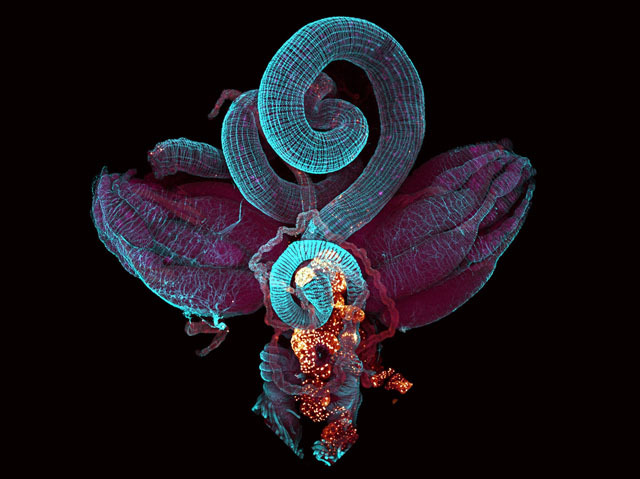 It may look like an alien descending from space, but these are the innards of a female fruit fly. The fly’s gut coils upwards (centre, blue) above her eggs growing to the left and right (pink), and fat stores below (glowing orange). After mating, female flies release a hormone, which triggers their intestine to grow dramatically, and stimulates their body to store more fat, according to results published this month by scientists at the MRC’s Clinical Sciences Centre (CSC). Called juvenile hormone, it acts in a similar way to human thyroid hormones. Scientists know that women’s hormone levels change during pregnancy, and affect our digestive system. Previous studies have also shown that the intestines of many mammals grow during pregnancy. The CSC researchers say their work suggests women don’t need to “eat for two” during pregnancy because their bodies change so that they absorb more energy from their food.

Find out more about this image, and read about the MRC’s Clinical Sciences Centre’s work on gut signalling and metabolism.