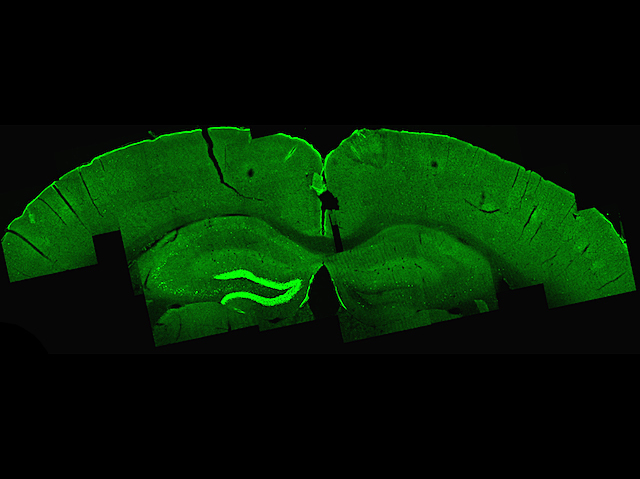 Patients with certain neurological disorders can achieve relief from their symptoms when appropriate parts of their brains are therapeutically activated. One approach – deep brain stimulation – is as invasive as it sounds, requiring patients to have holes drilled in their skulls and electrodes inserted. An alternative approach – transcranial magnetic stimulation – is entirely non-invasive, yet can only reach the brain’s outer-most layers, thus limiting the conditions it can treat. A new technique currently under development called temporally interfering (TI) stimulation may soon offer the best of both – deep brain stimulation without the surgery. The technique uses two ultrahigh electrical frequencies, which alone don't excite brain cells, passing straight through, but, when combined at a desired target location, interfere with each other and create a low-frequency signal to which neurons respond. Indeed, the image shows TI-induced activation (bright green) of neurons within a mouse’s hippocampus without stimulation of the surrounding brain.