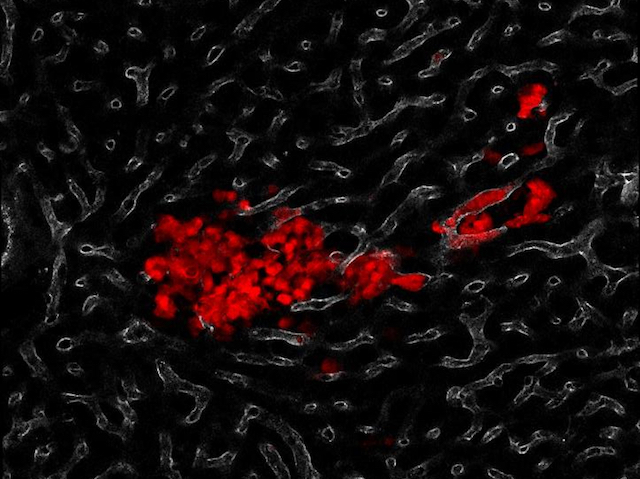 A particularly aggressive type of lung cancer, small cell lung cancer (SCLC) spreads quickly, and current treatments are ultimately ineffective. To identify new therapeutic targets, researchers performed genetic screens, testing the effect of individually deleting thousands of genes on the survival of SCLC cells. Compared to other lung and pancreatic cancer cells, SCLC cells suffered most from losing the gene for dihydroorotate dehydrogenase (DHODH), an important enzyme involved in making components of RNA and DNA. SCLC cells seem especially reliant on this chemical pathway, and are highly sensitive to inhibitors of DHODH, such as brequinar. Tests in mice, in which SCLC cells invade liver tissue (pictured, with SCLC cells in red and blood vessels in white), suggest that treatment with brequinar can limit tumour growth and spread, leading to increased survival. Already deployed against several other cancers, DHODH inhibitors may yet prove useful weapons in the fight against SCLC.

November is Lung Cancer Awareness Month in the UK and USA