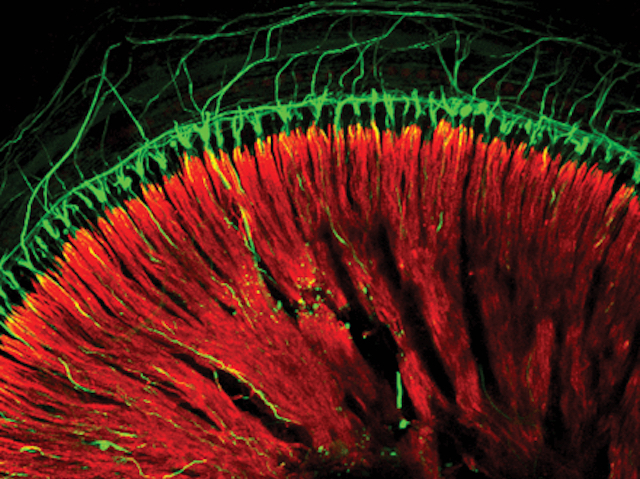 Enzyme involved in the development of Alzheimers is vital for hearing

With an estimated 50 million people worldwide living with dementia, scientists are always on the look-out for new ways to battle these neurodegenerative conditions. The enzyme BACE1, which is involved in Alzheimer’s disease development, could potentially treat or prevent the disease, but first scientists need to better understand the effect this enzyme has on the body.Researchers recently showed that mice born without BACE1 have hearing problems, specifically because their auditory nerve cells (green) are not properly coated with the all-important myelin sheath (red) that helps transport electrochemical signals about sounds in the environment from the ear to the brain. In contrast, blocking BACE1 in adult mice had no effect on their hearing. These findings help scientists better understand the role BACE1 has on the developing body, ultimately working towards ensuring that a treatment based on this enzyme is safe to administer long-term to patients with Alzheimer’s disease.