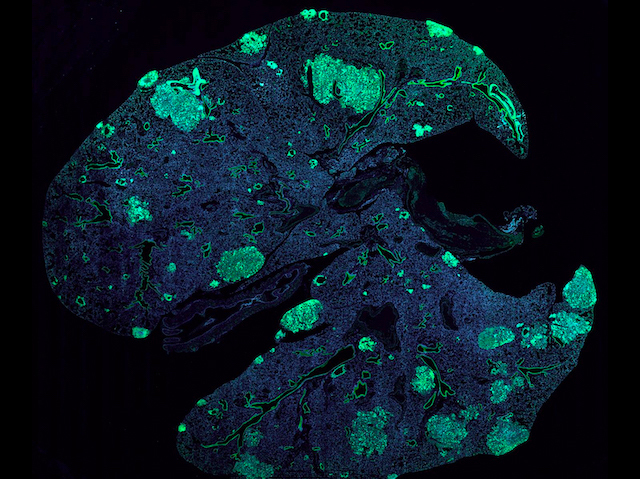 This is a mouse lung riddled with metastatic tumours (green) that originated from cancer in the animal’s breast. Regardless of whether a tumour initiates in the breast, bowel, skin or elsewhere, the deadly turning point in most cases occurs when cancer cells leave their birthplace and spread to other organs. While doctors hope to catch tumours before this happens, it’s not always possible, so treatments that slow or stop the spread are highly desirable. Researchers have now identified a molecular signal (called SLIT2) generated in the blood vessels infiltrating tumours that encourages cancer cells to leave home and set off around the body. Inhibiting SLIT2 in the blood vessel cells was shown to stop metastasis of breast and lung cancers in mice. This suggests that SLIT2 in the blood vessels of tumours could not only be a diagnostic indicator of metastasis, but also a target for potential future therapies.