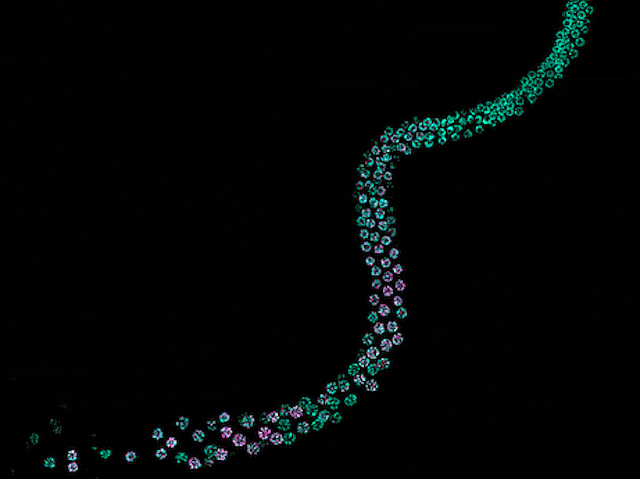 Nematode worms (C. elegans) are able to fertilise themselves, so it might seem odd to probe them for clues to human fertility. Yet both C.elegans and humans need to protect their precious germline cells – sex cells like the early spermatocytes, which mature along the transparent body of a wriggling worm, shown here stained under a fluorescence microscope. The DNA inside the cells (coloured green-blue) has been exposed to a blast of heat, leaving some damaged areas (purple). Researchers found that ‘heat shock’ harms this DNA by causing genes to ‘jump’, while the worm’s early egg cells or oocytes shield themselves from these damaging alterations. As heat may also damage DNA inside human sperm leading to infertility – perhaps studying the different responses in nematode sex cells might suggest treatments to bolster fertility in response to heat stress from lifestyle, illness and even climate change.