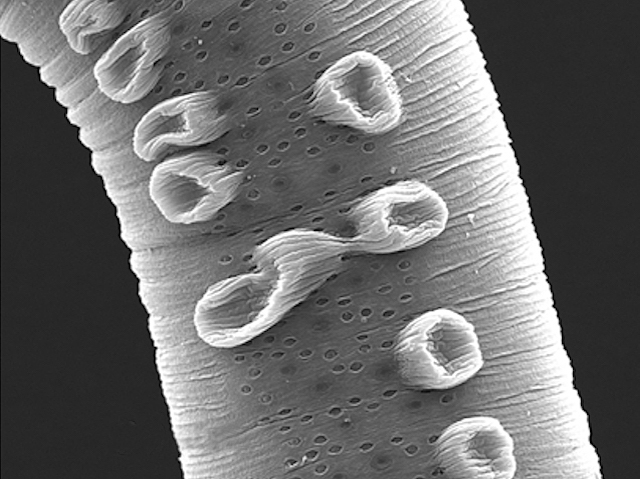 Greater understanding of the projections on whipworm –  a target for treatment

Right now there are about one billion infections worldwide with the parasitic worm, Trichuris trichiura or whipworm. It tunnels into the cells of human intestines and is thought to interact with its unwilling host using projections called cuticular inflations. The structure and function of these cuticular inflations are not well understood. Researchers now investigate by imaging these projections in another closely related whipworm, Trichuris muris, using a special type of scanning electron microscopy (pictured). They pinpointed when these projections develop and revealed a previously unknown web-like structure within them. What’s more, they found cells underneath the projections contained lots of energy-producing units called mitochondria. This hints at a role for these outgrowths in a high-energy task such as adapting the fluid environment surrounding the worm to support its survival in its host’s cells. These insights build a clearer picture of how whipworms function, which could help develop better treatments.