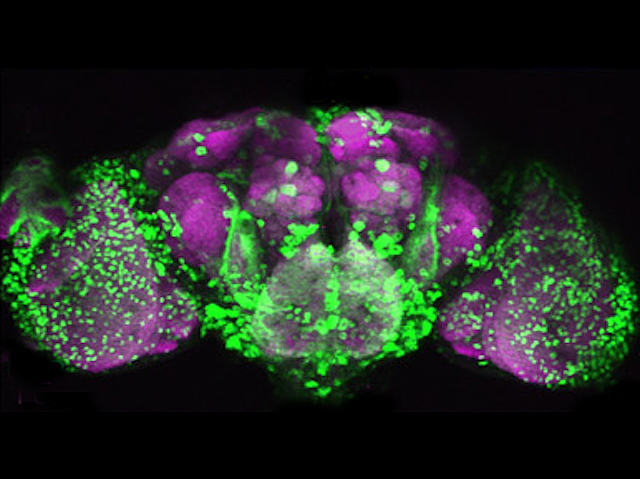 Insight from fruit flies into the neural activity controlling sleep

The fruit fly brain, pictured, shows neurons that are involved in wing expansion (green) – a developmental event occurring within the first half hour after adult flies emerge from their pupal shells. Scientists have discovered that if wing expansion is prevented either physically – by confining the animals or cutting their wings – or genetically – by blocking the activity of neurons involved, the insects sleep more in the subsequent 24 hours than flies whose wings expanded normally. It seems that when the insects are grabbing those extra Zs, their brains are busy adapting to the change of circumstances, setting up new neural circuitry. Indeed the brains of the flightless flies showed evidence of increased neural plasticity compared with those of control insects. Since sleeping can also sometimes help people resolve complex issues, perhaps studying these little insects will provide insights into what our own brains are doing to solve problems as we snooze.