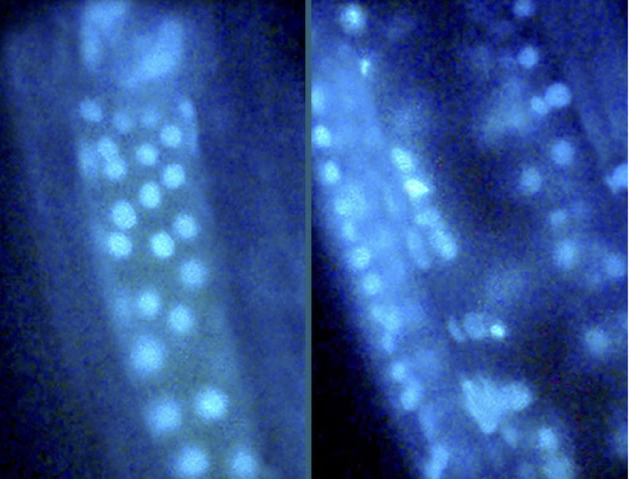 Microscopic parasitic worms infiltrate billions of people’s bodies worldwide and cause everything from blindness to anaemia, and can be fatal. Parasitic nematodes, such as the roundworm species Ascaris suum, have a weakness though: their intestinal cells don’t regenerate, so may not heal when injured. Encouraged by the hope that any interference with the worm intestine might be a killing blow, researchers analysed the genes and molecules associated with its essential functions. They discovered 10 molecules inhibited the organ, seven of which caused severe damage (right, with cell arrangement disrupted after addition of the inhibitor compared to the intestine of an unaltered worm, left). Some of these molecular weapons worked against several different species, suggesting they may be useful for a broad range of infections, and that focusing further research on the intestine – the nematode’s Achilles heel – could lead to new treatments.