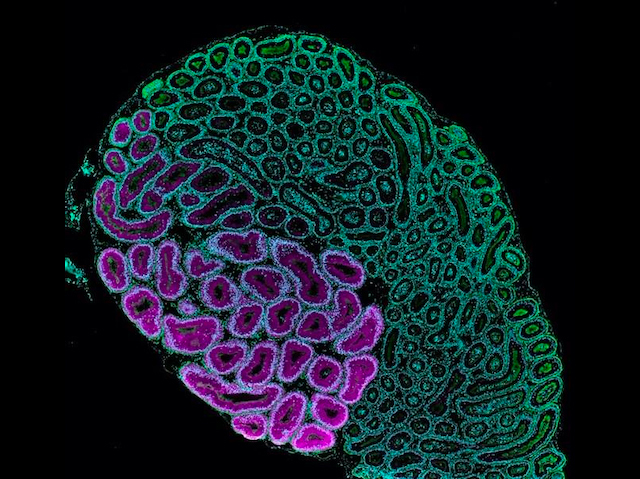 Made in the testes, sperm have a long journey ahead before emerging with the ability to fertilise an egg. From each testis’ seminiferous tubules, they travel to the epididymis, a long tightly-coiled tube where they continue to mature, before exiting through the vas deferens towards the ejaculatory ducts. A functional epididymis is critical to male fertility, and researchers recently discovered that this depends on communication with the testes during development. They identified a testicular protein, NELL2, which binds to a specific receptor in the developing epididymis, eventually unlocking production of the enzyme OVCH2 (in magenta in this slice through the epididymis), whose later interactions with a sperm surface protein, ADAM3, are essential for sperm maturation. Male mice lacking NELL2 are infertile, suffering from defects in sperm motility, suggesting that these complex interactions between testis and epididymis, known as lumicrine signalling, have major implications for research into male infertility.