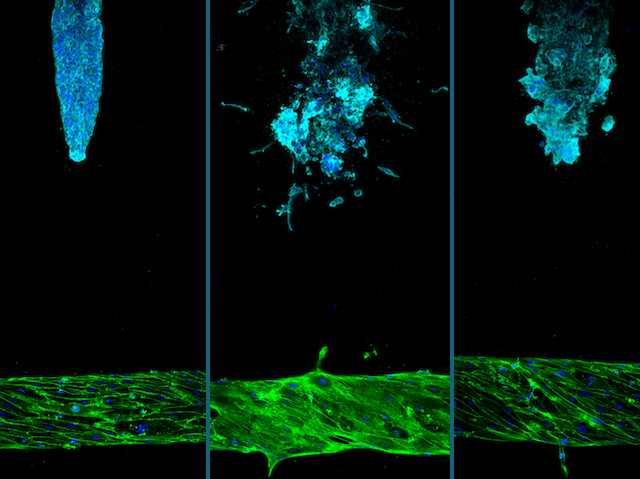 While mammary ducts are essential to developing breast tissue and milk production, they are also prone to genetic mutations which may lead to cancer. To investigate, scientists grew these 'model' ducts (highlighted in turquoise) from human mammary cells in the lab, while also recreating their microenvironment of nearby blood vessels (in green with blue nuclei). The middle and right ducts developed from healthy cells mixed with cells harbouring mutations in important genes – with drastic effects on their development and shape compared to the healthy duct (left). Surprisingly, chemicals produced by the mutated ducts affect cells in nearby vessels, leaving them weakened and 'leaky'. Such biology-mimicking models continue to offer perspectives on cancer that may be difficult to investigate in living tissues, and future studies may suggest how chemical messages between these tissues, an example of paracrine signalling, may be switched on or off during development or disease.