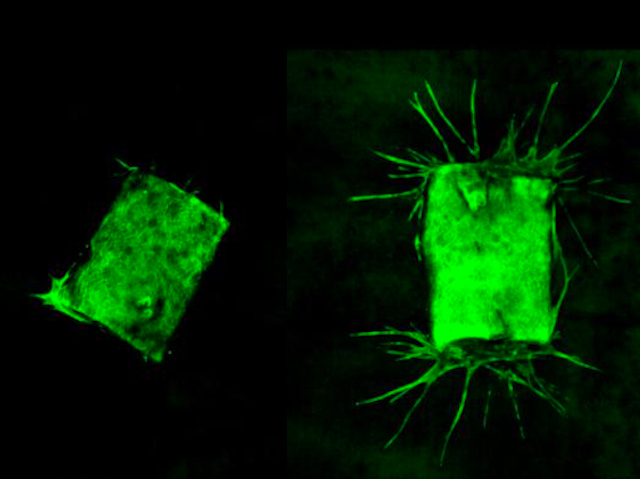 Bartonella henselae (B. henselae) are bacteria carried in insect bites that use a sneaky trick to avoid detection. They somehow urge their hosts to produce new vascular endothelial cells, prompting the creation of new blood vessels, or angiogenesis – confusing the immune system but attracting the attention of scientists. Researchers found that B. henselae make a protein, now known as BafA that acts like a vascular endothelial growth factor, which commonly coax vessel development in mammals like humans. In fact in these samples of a mouse’s aorta (artificially coloured green), exposure to BafA causes new vessels to sprout (right) compared to the vessel chunk without BafA (left). Researchers now have lots of options – using BafA to grow vessels for study in the lab perhaps, or one day turning these plucky invaders – that can cause Cat-scratch disease – into medical helpers used in regenerative medicine to restore damaged circulation.