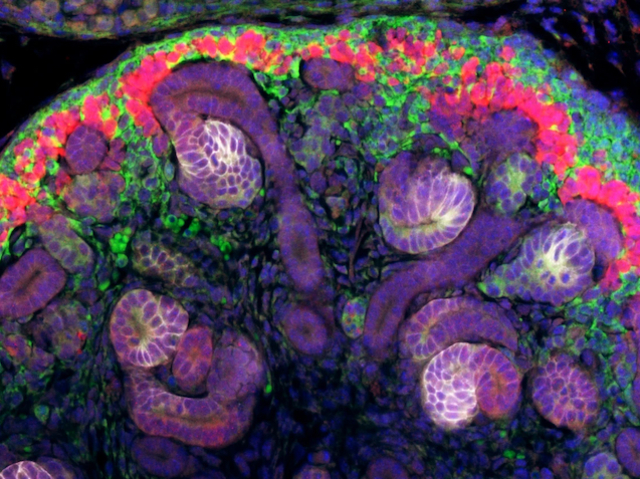 Our kidneys filter waste from our bloodstream, to be excreted as urine, thanks to units known as nephrons, where exchanges between blood in capillaries and fluid in renal tubules take place. During development, nephrons form from special progenitor cells (pictured in red, in a developing mouse kidney), a process dependent on proteins called R-spondins, which activate further signalling cascades. Without R-spondins, in mice, the multiplication, survival and differentiation of progenitor cells into nephron cells are strongly reduced, leading to a clear loss of nephrons. We have approximately one million nephrons per kidney on average, but numbers can vary widely between people, from 200,000 to over 2.5 million. Lower numbers have been linked to increased risk of chronic kidney disease, in which kidneys progressively lose their function; understanding the developmental causes behind this variation, including the role of R-spondins, could open up new perspectives for research into this condition.