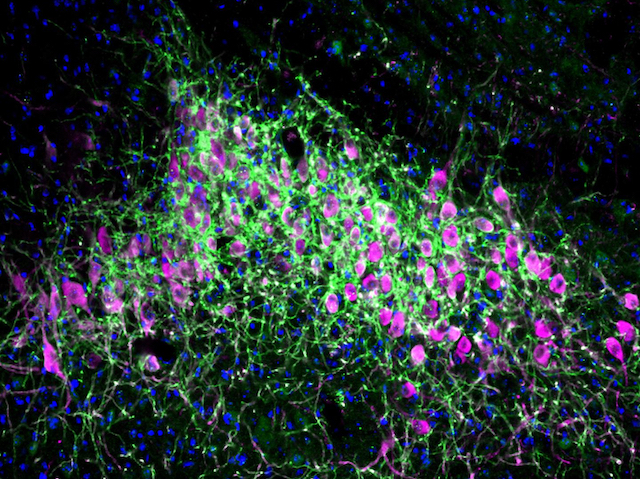 As you may have experienced in 2020 when working from home, maintaining your attention comes down to the capacity to ignore distractions while controlling impulses to do something else. These two abilities, although operated independently, can be traced to one area of the brainstem called the locus coeruleus (LC). A team of scientists recently showed how distractibility and impulsivity are controlled by LC neurons that target separate regions of the prefrontal cortex. The team were able to demonstrate this in mice in real-time using optogenetics, a technique that uses light and the light-sensitive protein channelrhodopsin to control the electrical signals neurons use to communicate. Here, we see LC neurons (in purple) expressing channelrhodopsin (in green). The ability to control the neural pathways for distractibility and impulsivity could in future lead to new treatments that tackle conditions where these abilities are impaired, such as attention deficit hyperactivity disorder (ADHD).