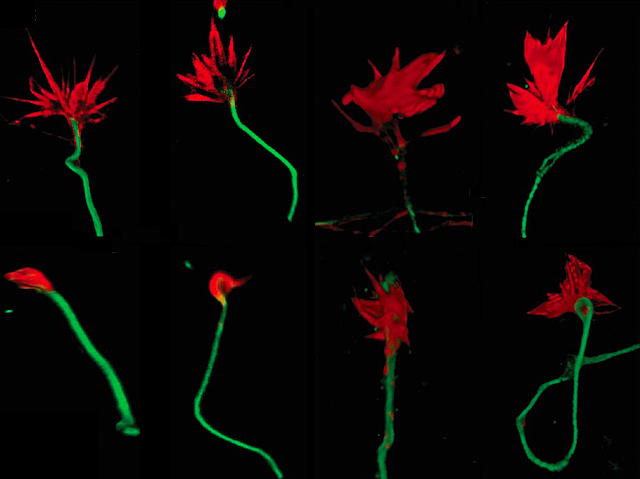 Any good gardener knows that keeping a rosebush in shape requires careful pruning of stray off-shoots. The same is true of these microscopic roses, which are in fact mouse brain cell projections from a study examining the role of a genetic mutation common in people with autism spectrum disorder. Previous work had shown that various forms of the protein ankyrin-B, important for brain cell structure, are affected by mutations in the gene ANK2. This investigation revealed the growing tip of cell projections (red, top left) is typically tamed by a regulatory factor called Sema 3A (usual results shown bottom left). The researchers investigated Sema 3A’s pruning abilities when various forms of ankyrin-B are removed (three right hand images bottom row, with untreated counterparts above), and identified the ankyrin-B forms essential to rigorous regulation of brain cell growth, which may explain a mechanism behind the autism symptoms people experience.