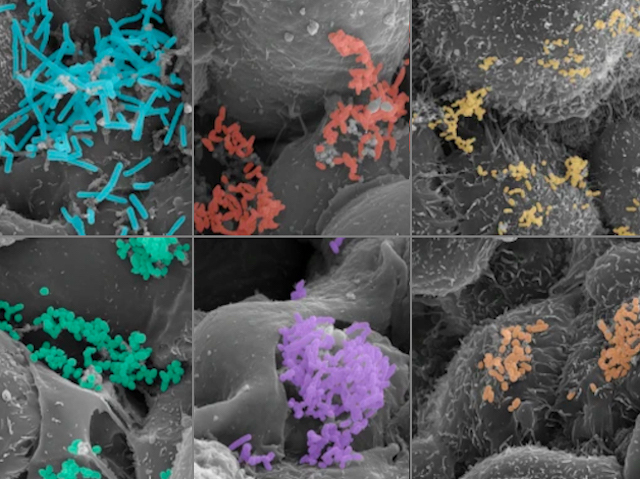 Bacterial vaginosis (BV) is the most common vaginal infection. It’s what happens when so-called ‘bad’ bacteria overtake the ‘good’ bacteria, Lactobacilli, that live in a healthy vagina. Researchers investigate what happens in BV using a 3D epithelial cell model that mimics the lining of the vagina. They infected the model with Lactobacillus crispatus (pictured in scanning electron micrograph, false-coloured blue), with one of the four types of bacteria found in BV (red, yellow, green, purple) or with all four BV bacteria (orange). Next, they assessed changes in immune and metabolic proteins. Two of the bad bacteria caused a large increase in inflammatory proteins, while three of them changed levels of proteins involved in barrier formation. In contrast, L. crispatus produced an antimicrobial compound. These results are in line with BV symptoms and highlight the usefulness of this model in investigating the effects of disease-causing and non-disease-causing bacteria on the vagina.