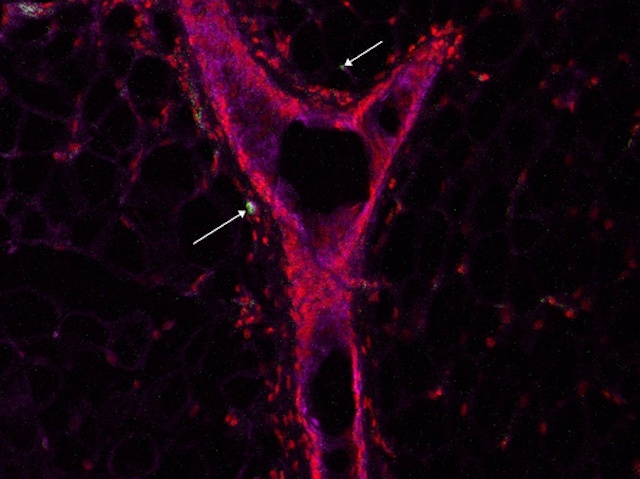 As well as being the prelude to a baby-shaped bundle of giggles and screams, full-term pregnancy reduces the risk of breast cancer, for young mothers at least. Now, researchers are gaining clues as to how pregnancy boosts the breasts’ cancer-fighting capacity. Among the body’s anti-cancer defences are the patrolling immune cells, which destroy any rogue cancer cells that pop up. New work in mice shows that such immune cells – specifically, natural killer T (NKT) cells – become more abundant in mammary gland tissue after full-term pregnancy. It turns out post-pregnancy breast epithelial cells (coloured red) produce a protein called CD1d, which recruits NKT cells (green, arrowed). Without CD1d, fewer NKT cells migrated to the animals’ mammary glands and the cells were more prone to cancer-like growth. By understanding how NKT cell recruitment is boosted by pregnancy there’s hope the process could be induced clinically in cancer patients to support treatment.