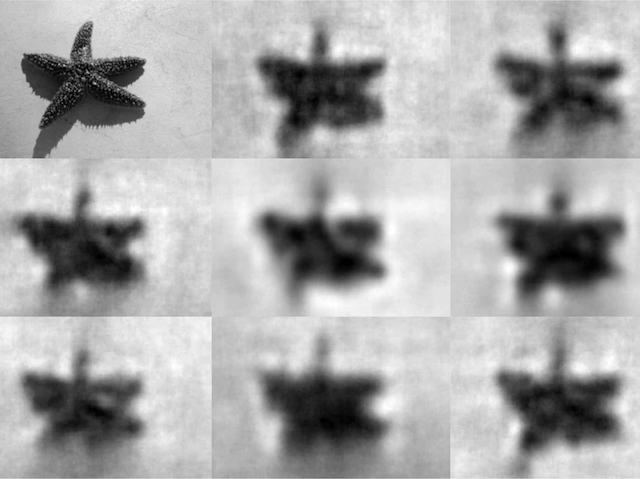 Images reconstructed from the electrical signals received by the retina

Vision is an extraordinary sense, in which light reflected from surfaces is absorbed by light-sensitive cells, or photoreceptors, ultimately enabling the brain to reconstruct detailed scenes. In the eye’s retina, activated photoreceptors send electrical signals, via interneurons, to over 20 types of retinal ganglion cells (RGCs). Known as feature detectors, RGCs collate these signals to respond to different visual stimuli, then send information to the brain. To investigate this process, scientists used isolated retinas from macaques, primates with a similar visual system to ours, to record electrical signals from hundreds of RGCs as they responded to various images. Building a model of how RGCs interpret visual information, they were able to reconstruct pictures from patterns of RGC signals, as in the example above (original top left, with reconstructions from seven retinas). Understanding how RGCs operate will be useful for designing artificial systems hoping to alleviate some forms of blindness.