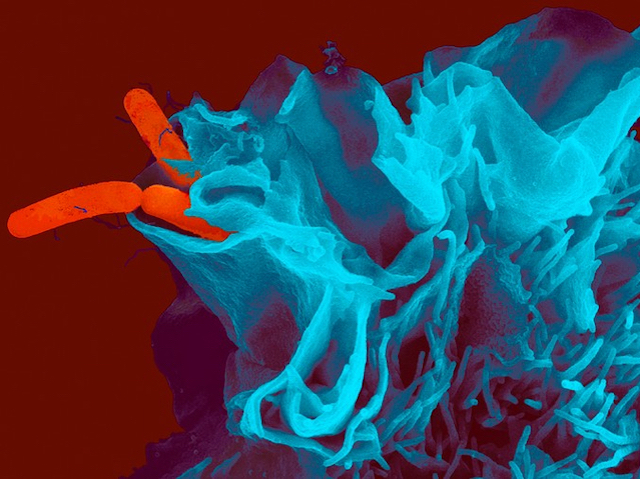 Risk of human infection by drug-resistant bacteria from seagulls

Antibiotic resistance in bacteria is one of the key medical challenges of this century, and monitoring bacterial populations in the wild demonstrates the scope of the problem. Species in close contact with humans, like gulls, known for scavenging our leftovers at the seaside, are likely to share our bacteria, including antibiotic-resistant strains. Following evidence of antibiotic-resistant Escherichia coli in Australian silver gulls, a recent study on yellow-legged and Audouin’s gulls in the Mediterranean also found resistant strains of Campylobacter jejuni and Salmonella Typhimurium (pictured, in red, invading a human cell). Common causes of diarrhoea, these latter bacteria are transmitted mainly through contaminated food and domestic animals. Finding them in multiple gull species highlights both the potential risk for transmission and the extent of contamination from human and agricultural waste, so gulls could serve as useful sentinel species, providing an indicator of the prevalence of antibiotic resistance in the environment.