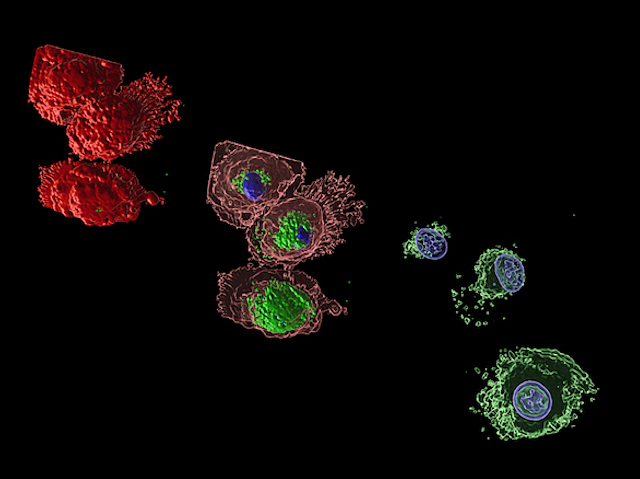 Elephantiasis, or lymphatic filariasis, is a disfiguring and painful disease affecting millions throughout the tropics and sub-tropics. It is caused by a parasitic worm transmitted through insect bites, and improved treatment and prevention is much needed. The parasite establishes a chronic infection by manipulating the immune system. Researchers examined how, during an early stage of the life cycle, the parasite infiltrates cells with extracellular vesicles – small packages of dangerous chemicals. They found that these vesicles (green) are absent from the surface of immune cells (red, left), but were absorbed fully inside (middle), with some even appearing in the cell control centre, the nucleus (blue, right). Once inside, they interfere with essential molecular pathways, hampering the immune cells’ attempts to ward off the infection like an undercover spy scheming behind enemy lines. Preventing this infiltration could empower the body’s defences, and provide new strategies to prevent and manage the disease.