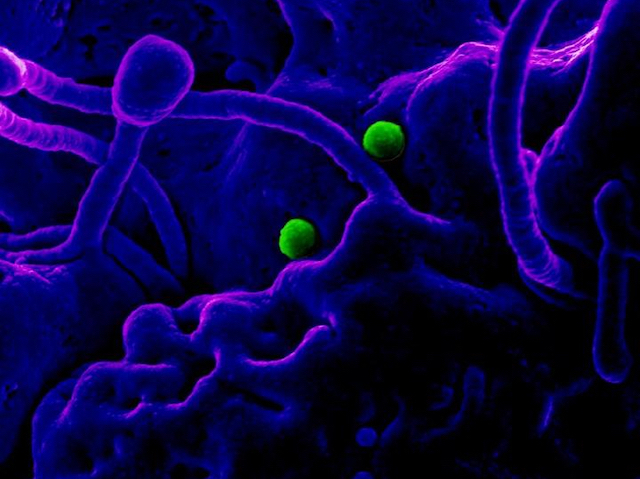 Before SARS-CoV-2, responsible for COVID-19, two related coronaviruses previously triggered smaller-scale epidemics: SARS-CoV, emerging with a major outbreak in Asia in 2003, and MERS-CoV, identified in Saudi Arabia in 2012. Thought to have moved into humans from camels, MERS-CoV (pictured, coloured green, on camel cells) causes a respiratory disease known as Middle Eastern Respiratory Syndrome, and is still present in the region. No vaccines or treatments currently exist, but researchers are developing therapies based on man-made monoclonal antibodies targeting the MERS-CoV spike protein, necessary for infecting host cells. In mice, treatment with a combination of these antibodies, either before or after infection with MERS-CoV, leads to lower virus levels and reduced symptoms in the lungs, demonstrating both preventative and therapeutic benefits. Meanwhile, early trials with human volunteers suggest the antibodies are safe to use, paving the way for further trials, and encouraging the development of similar therapies for other coronaviruses.