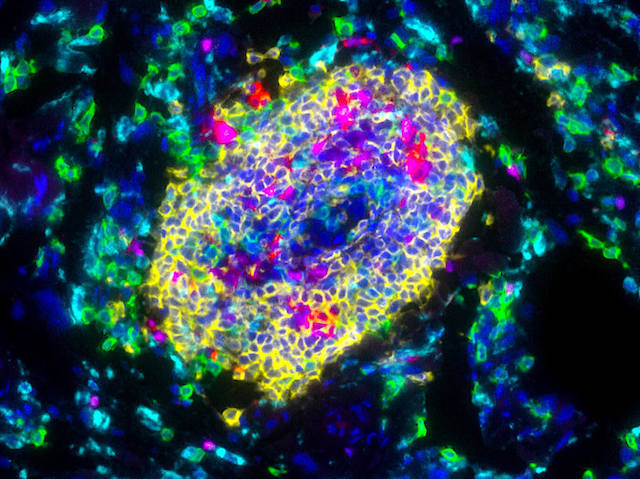 Immune cells caught in the act of confronting cancer cells

Deep inside a sarcoma tumour, cancer cells and immune cells are squaring up for a fight. This image shows what’s known as a tertiary lymphoid structure: a collection of immune cells that have infiltrated the tumour and formed a kind of ‘fortress’ inside it from which they are preparing to attack the cancer cells. This image was created using a technique called multiplexed immunohistochemistry, which highlights the activity of various immune cells in different colours and can reveal how they are communicating with each other. T cells, highlighted in pink, play a vital role in helping other immune cells recognise and destroy dangerous cancer cells. These T cells also have high levels of a molecule called OX40 (red), which enhances their activity against cancer cells. Patients whose tumours also have OX40 may be more likely to benefit from new immunotherapy drugs that enhance the cancer-fighting powers of the immune system.