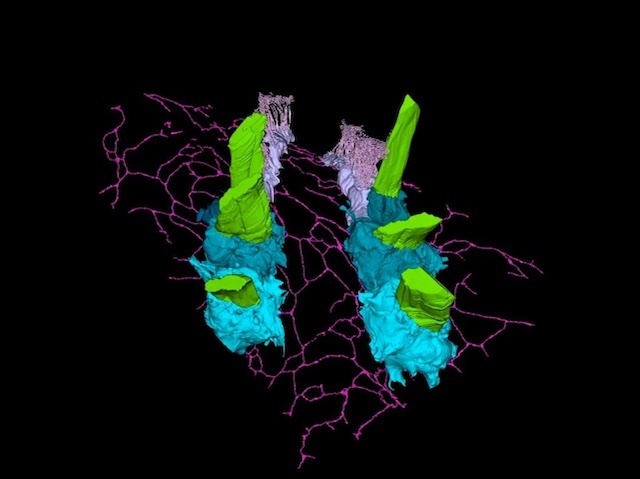 Shedding light on the evolution of nervous systems

Ranging from just a few millimetres to 1.5 metres in diameter, blobby sea-dwelling comb jellyfish are thought to be some of the world’s most ancient creatures. However, there’s disagreement here, with some researchers believing that sponges – which have no nervous system at all – are older. So, did comb jellies evolve from sponges and then develop their own nervous system? Or did sponges split from jellyfish and lose their nerves? To find out, researchers have been studying the nervous system of the comb jellyfish Mnemiopsis leidyi, creating detailed images like this (nerves are shown in pink, while the fringe-like combs are green and blue) and analysing the molecules that send signals between nerve cells. Although there’s no definite answer yet on which came first, this study provides more data on what it takes to make a nervous system and could ultimately shed light on the evolution of our own complex brains.