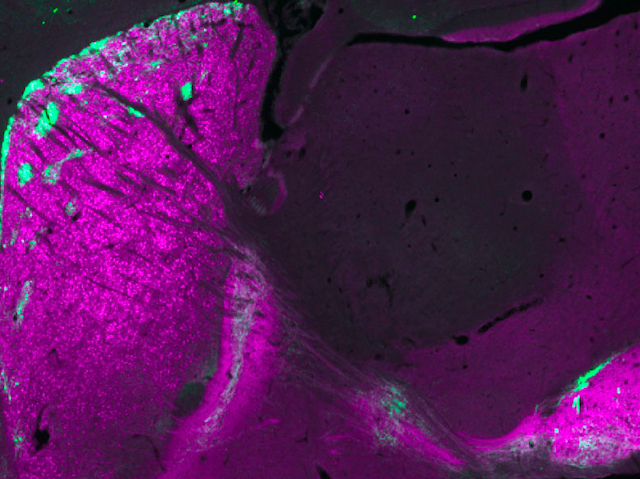 Rocking, clicking, sniffing, picking. These repetitive tics are common in people with drug addiction and neurological disorders like schizophrenia. Animals induced to have comparable conditions show similar behavioural glitches, and a new study looking at a mouse model of drug addiction has identified a family of genes involved. Mice were exposed to amphetamine, and an analysis of gene expression revealed a surge in those regulated by a particular molecular signal, called neuregulin 1, during repetitive behaviours. The gene activity was most pronounced in striosomes (green in the mouse brain section pictured), brain cells which contain high levels of neuregulin 1. Mutations in genes linked to neuregulin 1 are a common risk factor for schizophrenia, which may suggest why drug use can predispose people to developing schizophrenia. Understanding the molecular mechanism behind these behavioural glitches could help provide treatments to keep them under control, and ultimately tackle addiction and schizophrenia.