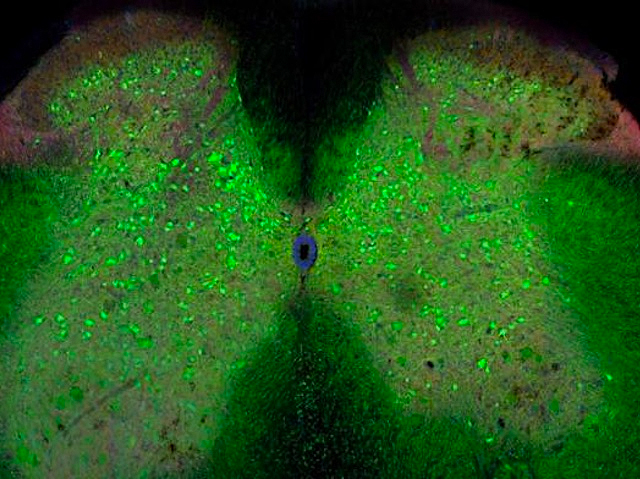 Amyotrophic lateral sclerosis (ALS) is a progressive and ultimately fatal neurodegenerative disease in which a person’s motor neurons – those controlling walking, talking, swallowing and so on – gradually die. This devastating disease can strike apparently healthy adults and send them to their death in just a few years. With the hope of understanding ALS pathology and developing treatments, scientists have, not surprisingly, placed motor neurons themselves in the spotlight. But recent research has shifted the focus to the cells controlling the motor neurons – interneurons (bright green dots in this mouse spinal cord). Studies in a mouse model of ALS have revealed that loss of interneuron connections actually precedes the death of motor neurons and parallels the loss of coordination. Furthermore, silencing interneurons in healthy mice led to ALS-like coordination problems. For now, an ALS cure remains wishful thinking, but it’s hoped that these new insights will bring new intervention opportunities.