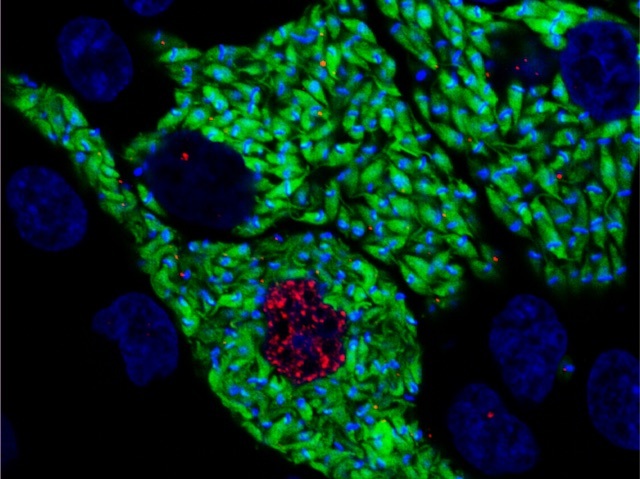 Endemic to South and Central America, and thought to affect around 8 million people worldwide, Chagas disease is caused by the parasite Trypanosoma cruzi, usually transmitted by blood-sucking bugs. Infection with T. cruzi causes oxidative stress in cells, a phenomenon characterised by an increase in harmful molecules called reactive oxygen species (ROS), beyond the cells’ capacity to detoxify. This ultimately disrupts proteins and DNA, as in these infected cells (pictured, with parasites in green), where red highlights chemical evidence of DNA damage. In a recent study, researchers tracked signs of DNA damage over the course of infection in cultured human cells, to better understand the relationship between the parasite and oxidative stress. T. cruzi appears to benefit from higher levels of ROS; several treatments designed to raise antioxidant levels, and thus decrease the amount of ROS, actually reduced parasite growth inside cells, suggesting new avenues to explore for possible therapies.