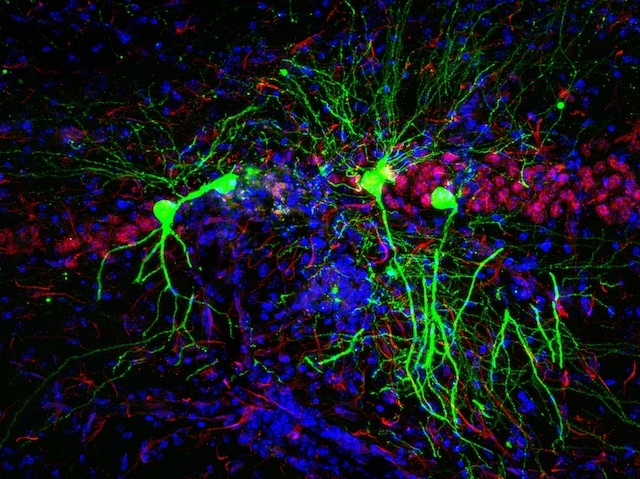 Responsible for chronic infections in roughly a third of the world’s population, Toxoplasma gondii parasites can find a home inside a range of tissues, from muscle cells to neurons, and cause serious disease in patients with weakened immune systems. In the brain, researchers are investigating how Toxoplasma affects neuron function, using fluorescent proteins to tag mouse neurons injected with T. gondii proteins (Toxoplasma-injected neurons, or TINs, pictured in green). TINs mainly occurred in two brain areas: the outer layer, or cortex, and the striatum. Within the striatum, recordings of electrical activity from individual neurons revealed that TINs had highly abnormal electrical properties, while nearby neurons were only slightly affected. The number of TINs also drastically decreased over several weeks, suggesting that these unusual patterns were symptomatic of unhealthy, dying neurons. Continuing to study neuronal responses to Toxoplasma should help better understand how chronic infections can persist in the brain.