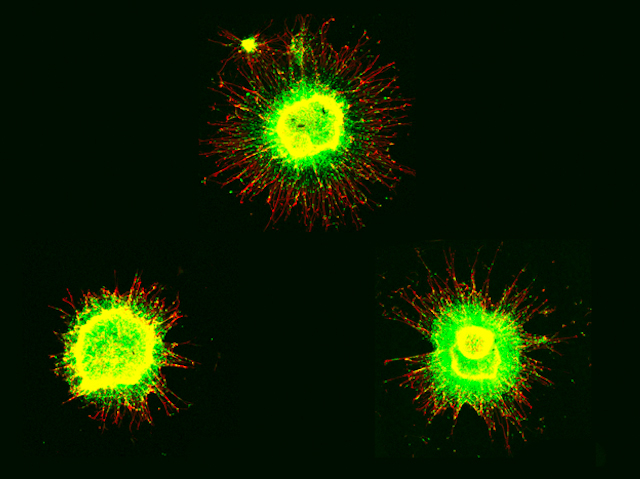 Caused by carrying an additional, third copy of chromosome 21, Down syndrome is associated with multiple physical and neurological symptoms. Within cells, the extra chromosome wreaks havoc, changing the shape of other chromosomes, and thus affecting gene expression. In neural progenitor cells (NPCs), giving rise to several key types of brain cells, this disruption results in traits reminiscent of senescent cells – these are cells that have stopped multiplying but not yet died, and can accumulate to cause problems during ageing. One characteristic is reduced cell migration, as seen in the NPC clusters above, with red tracks representing protein filaments involved in cell movement: compared to typical NPCs (top), Down’s cells (bottom, left) move less, but senolytic drugs, which target senescent cells, help to restore movement (bottom, right). Similarities between the mechanics of Down syndrome and senescence shine a different light on this condition, opening up new avenues for potential therapies.