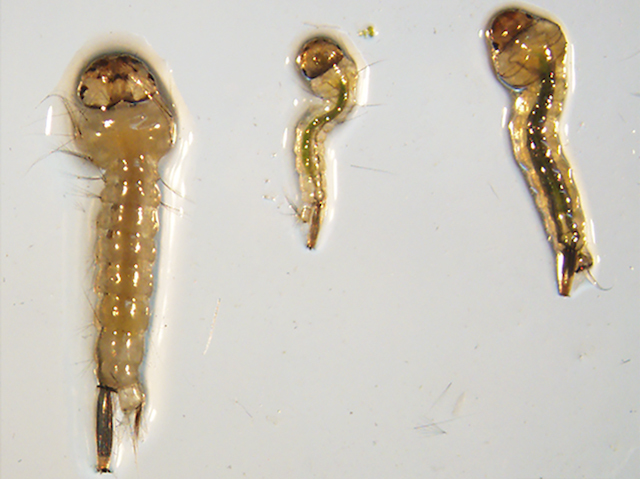 Widely-distributed globally, the southern house mosquito, Culex quinquefasciatus, is an important vector for viruses affecting animals and humans. Its larvae feed on a wide range of microorganisms, making them highly adaptable, but some foods can be harmful. While monitoring mosquitoes in artificial pools of stagnant water, scientists in Argentina noticed that larvae were absent from a container filled with bright green microalgae, later identified as Neochloris aquatica. In laboratory tests, female mosquitoes preferred to lay eggs in water containing the microalgae, but most of their offspring died. Even older, second-instar larvae suffered: pictured three days after starting a new diet, larvae provided only with microalgae (middle), or even a mixture of microalgae and fish food (right), were considerably smaller than those fed fish food alone (left), and struggled to complete their development. Attractive to egg-laying females yet harmful to larval development, N. aquatica could inspire new tools for biological control.