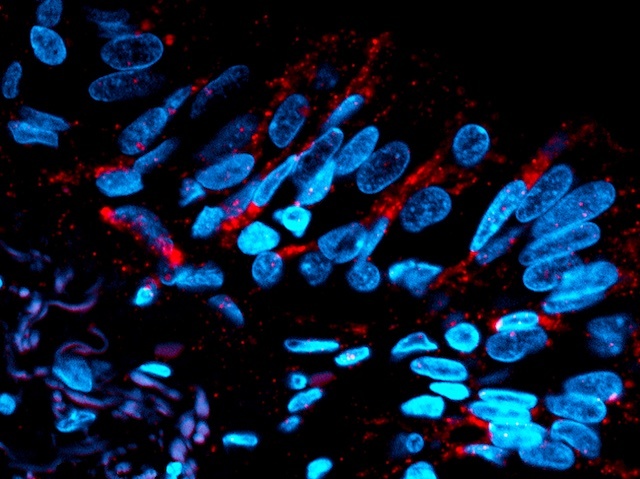 Many diseases wreak havoc not by introducing new villainous elements, like during infections, but by causing harmful changes to innate processes of the body. This is true of chronic obstructive pulmonary disease (COPD), a progressively debilitating condition often caused by smoking. Treatments are limited, so researchers are investigating the mechanisms behind the symptoms. They focussed on microRNAs – tiny strands of genetic material that regulate the expression of particular genes – in patients and in mice exposed to cigarette smoke. They found that the amounts of one particular microRNA, miR-21, increased in the airway linings during COPD progression (pictured, miR-21 in red and lung cells from a COPD patient in blue). Blocking this microRNA reduced inflammation and improved lung function in mice, restoring cellular pathways back to their usual rhythm. By providing a potential target for new treatments, this discovery could be a breath of fresh air for patients.