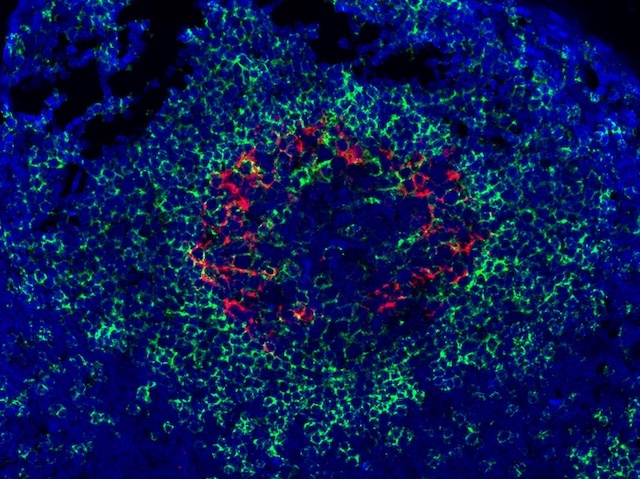 Transmitted by ticks, flaviviruses like Kyasanur Forest disease virus (KFBV) and its close relative Alkhurma haemorrhagic fever virus (AHFV) are emerging threats for global health. With a small but growing number of cases, and an expanding range in India and the Middle East respectively, these viruses can cause fatal haemorrhagic fevers, but remain relatively-poorly understood. Typical laboratory animals like mice can be infected with both viruses, but the diseases often manifest very differently compared to human patients. Among primates, rhesus macaques (Macaca mulatta), are largely protected by a protein hindering viral replication, but pigtailed-macaques (Macaca nemestrina) are not. Infecting them with KFBV or AHFV triggers symptoms more consistent with those of humans, with virus particles found in the gut and lymph system (pictured are KFBV particles, in red, in a lymph node). As a model system, this species could help us better understand these viruses, and potentially develop future vaccines.