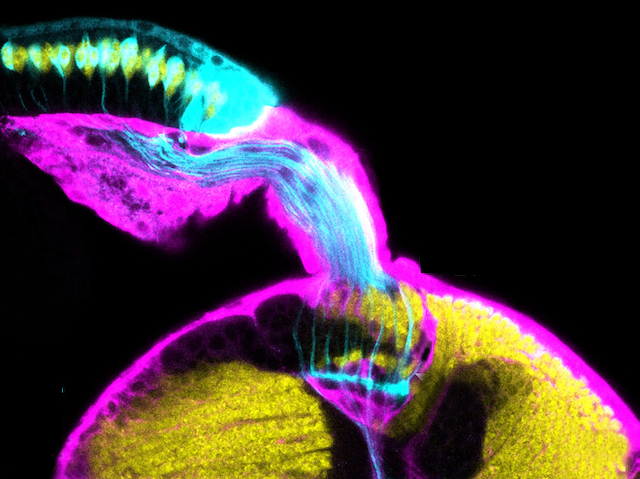 If IKEA flatpacks have taught us anything, it's that you need the right number of pieces. Same goes for your nervous system. Researchers investigate how correct neuron numbers are produced using confocal microscopy of the developing fruit fly visual system (pictured). Projections from light-sensing cells (cyan, middle bottom) release the chemical EGF, triggering precursor cells to become neurons (yellow). Precursors are arranged in columns of six, but only five become neurons, the sixth dies. Another cell type – glia (magenta, middle bottom) – also aid neuron development. Using mutant fly larvae whose photoreceptors don’t release EGF and hence neurons are lost, the team showed that restoring EGF restored neurons. But if glia were prevented from responding to the EGF, the neurons didn’t develop. Glia were found to release chemicals triggering neuron development and certain neurons were shown to release chemicals preventing the extra precursor from becoming a neuron. So, complex cell-to-cell signalling controls neuron numbers.