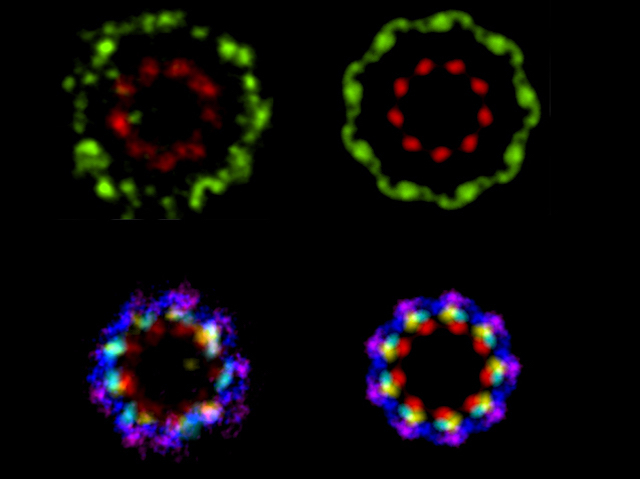 The nematode worm, C.elegans (Caenorhabditis elegans) shares many of our genes, so makes an excellent model for studying parts of us that evolution has kept or ‘conserved’. But there are limits to studying small, crucial elements like these centrioles – structures in the cytoplasm used like north and south poles to help cells orientate themselves. Here researchers use a combination of expansion microscopy, to swell the structures up, and STED microscopy to picture them in high-resolution. They pick apart the tiny components in the overall centriole, like a watchmaker poring over cogs and wheels, although 10 million times smaller. The 'raw' images captured on the left are digitally ‘symmetrized’ using software (right) – revealing the symmetry of a centriole’s different rings in different colours. Now researchers can investigate how each part plays a role in anchoring dividing genetic material during mitosis – in healthy and cancerous cells.