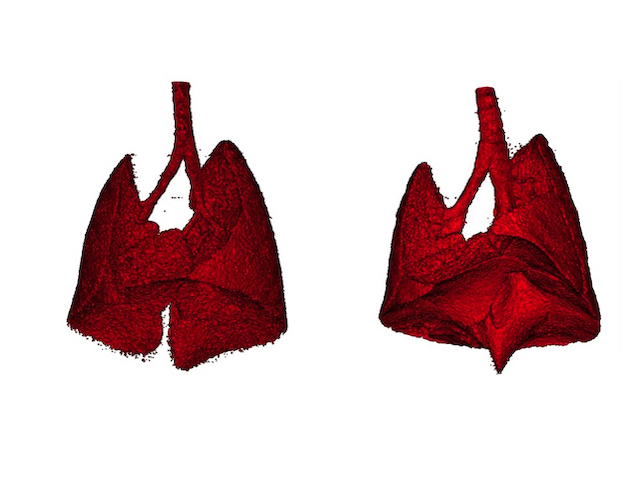 In 1971, Wimbledon in London became home to an imaging revolution – the world’s first CT scan on a patient. CT scans are now commonplace, creating 3D images of organs by capturing multiple X-ray images from different angles. This makes imaging moving organs difficult. In mouse studies of lung disease, researchers have overcome this using retrospective gating (RG), capturing more images of the lungs and grouping them into breathing phases, each reconstructed separately – this takes longer. The organ’s function has been measured using another technique – X-ray-based lung function measurement (XLF). Now, a new faster technique has been developed, RG-based XLF, which measures lung anatomy and function simultaneously. Testing it in healthy and mdx mice, which model Duchenne muscular dystrophy, proved successful. Function and anatomy data (pictured) were captured in just 34 seconds. For example, the abnormal shape and position of the diaphragm in mdx mice (right) was identified when compared with healthy lungs (left).