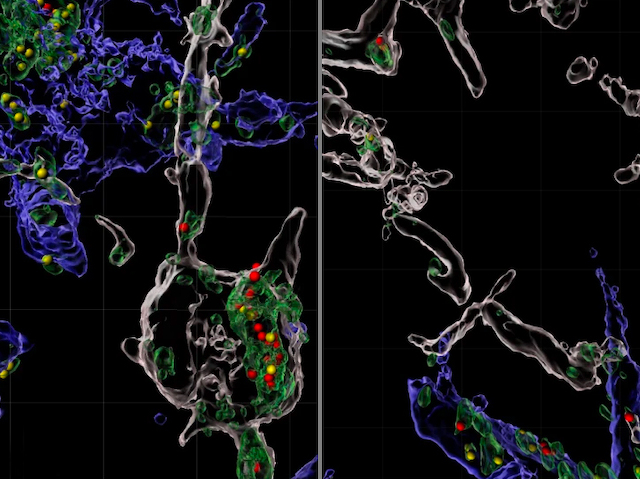 Your thoughts and memories are held within billions of neurons in your brain and the connections between them (synapses). In Alzheimer's disease, neurons and synapses are destroyed by the immune system. Researchers investigate how using a mouse model for Alzheimer's. 3D reconstructions using confocal microscopy images (pictured) of healthy (right) and affected (left) mouse brains revealed immune cells called microglia and astrocytes, and small immune proteins called the complement cascade are involved. Synapse proteins accumulated in microglia (white) and astrocytes (blue) of diseased brains, specifically in lysosomes (green) – compartments that digest substances a cell engulfs. Astrocytic lysosomes contained more proteins from excitatory synapses (yellow), while microglial lysosomes contained more from inhibitory synapses (red). Notably, Alzheimer’s model mice genetically engineered to lack a complement protein had fewer synapse proteins in either type of lysosome and fewer contacts between astrocytes and synapses, revealing the importance of complement in the loss of synapses.