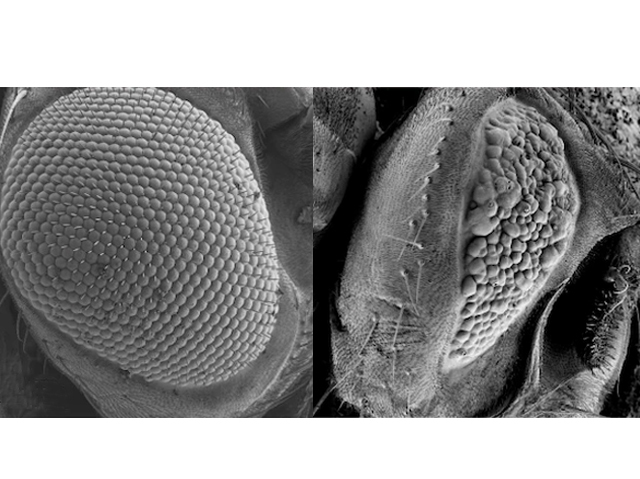 Protein aggregations are a feature of many neurodegenerative conditions. Tangles of tau proteins within brain cells, for example, are a hallmark of Alzheimer’s disease. Because it’s practically impossible to study the progression of such diseases at a cellular level in humans, researchers rely on animal models, including the fruit fly. The picture shows the dramatic effect of expressing human tau protein in the insect’s eye (right). A healthy eye is shown on the left for comparison. Using flies, scientists have discovered disease-related forms of tau jam up the neurons’ transportation machinery. This causes their axons, along which impulses travel, to retract and lose connections with other cells, which ultimately kills the neurons. Researchers have also identified tau-interacting proteins that make tau tangles even more toxic. By unravelling these details of the tau tangling process in flies, the ultimate aim, of course, is to prevent or reverse it in patients.