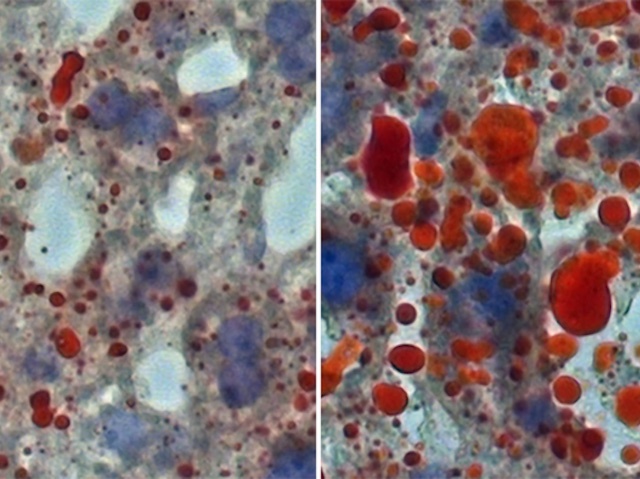 Pinpointing cells in the brain that drive overeating

If doughnuts make you drool, blame your amygdala, a structure in the brain that links emotional value (in this case yumminess) to a particular stimulus – a sight, smell, taste or sound. While such value-linking is an essential part of learning, occasionally, it might be helpful to override it. How many times, for instance, have you eaten more fries than was necessary? Recently, scientists have identified, in mice, the particular amygdala cells involved in such overindulgence and shown that inactivating the cells prevented the animals overeating, keeping them lean and healthy. The image shows liver specimens from mice in which the neurons were inactivated (left) or not (right) with a clear difference in the abundance of fat (red). In humans, diets often fail because people revert to bad habits. If it were possible to suppress those pesky amygdala neurons, however, perhaps weight loss wouldn’t require so much will power.