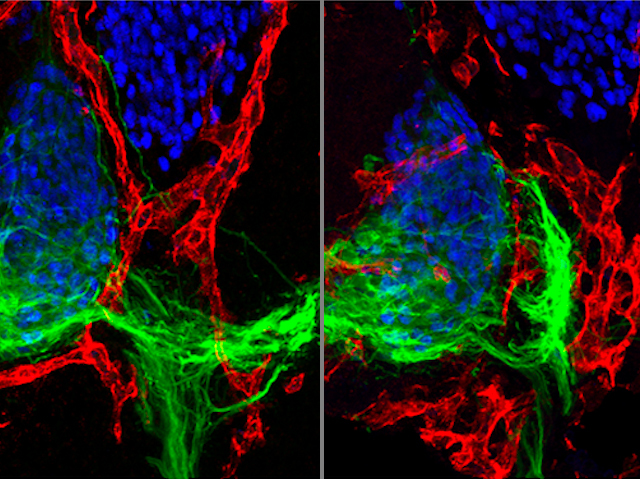 Insights into the interplay between the vascular system and neuron development

To lift your finger and click on this page, messages must fly between your brain and muscles to coordinate the movement. Signals travel along a vast network of neurons, but how each neuron develops in just the right place is not well understood. Researchers have previously interrogated genetic activity within the nervous system during growth, but a recent study broadened the approach, testing the impact of genetic mutations in other parts of the body as well. They discovered that mutations affecting the vascular system hampered neuron development. If blood vessels – essential for providing neurons with fuel to grow – lacked a particular receptor, they failed to make space for growing neurons (right, in green neurons blocked by red blood vessels compared to healthy mice, left, with neurons reaching cleanly towards muscles). This could have implications for many conditions linked to motor neurons, such as ALS, and treatment approaches focused on growing new neurons to replace damaged ones.