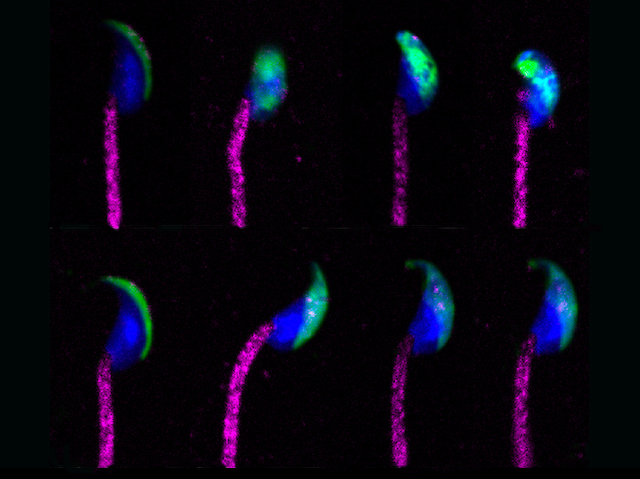 Sperm are simple in structure. A head carrying precious cargo, and a tail to power it to its destination. But even something so seemingly simple requires accurate building to ensure the best chances of fertilisation. That includes the formation of the acrosome – the cap of the head full of enzymes that help to break down the outer layer of the egg and allow the sperm to penetrate for successful fertilisation. Mutations in two proteins, FAM71F1 and FAM71F2, are common in male patients with infertility because the acrosome can't form the normal half-moon shape. Shown are a ‘normal’ sperm on the left in each row and three with mutated FAM71F1 (top) and FAM71F2 (bottom) on the right. The acrosomes (green) in the mutated sperm are clearly malformed leading to fertility issues, despite there being no effects on the DNA in the sperm head (blue) or the mitochondria (magenta) that power the tail.