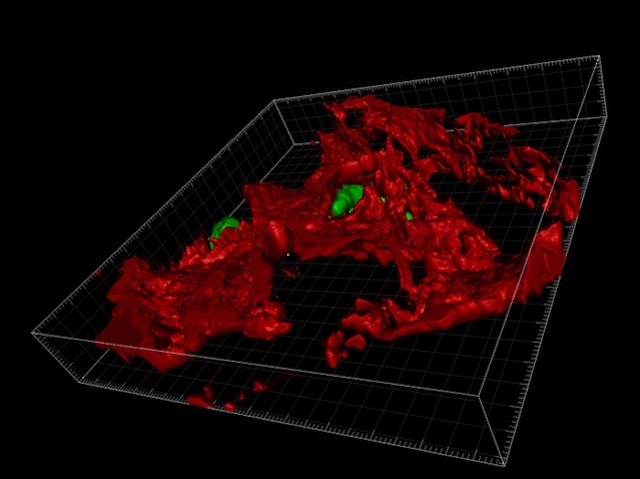 When cancer cells leave their original tumour site and travel the body (metastasis), their destinations are generally not random. Indeed, the locations of new tumours depends on the original cancer type. Breast cancer cells, for example, tend to metastasise to the bone, brain, liver and lungs, with bone being the preferred site by far. In studying this bone-targeting mechanism of breast cancer, researchers have recently identified a critical molecule, called ZEB1. In mice, humans breast cancer cells with abundant ZEB1 invaded the animals’ bones, while those without did not. The image shows such ZEB1-producing human breast cancer cells (green) attacking mouse bone (red). While a lack of ZEB1 didn’t prevent metastasis per se (the cells mainly colonised the animals’ lungs instead), the discovery is an important step toward understanding how cancer cells seek out new locations and thus how to slow or stop these destructive developments.