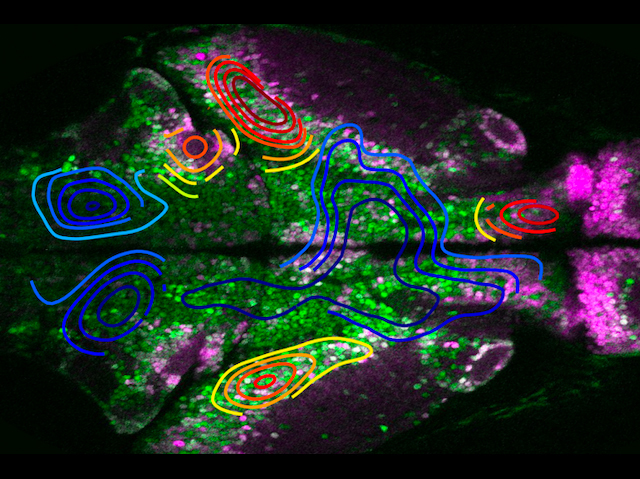 Affecting around 50 million people globally, epilepsy is characterised by seizures, episodes of involuntary movement triggered by bursts of electrical activity in the brain. Seizures are linked to an imbalance between excitatory neurons, stimulating other neurons, and inhibitory neurons, dampening activation, yet how exactly they originate is somewhat controversial. Although seizures are typically associated with increased excitation, some studies found inhibitory neurons firing as seizures began, suggesting they might also be involved. Hoping to resolve this debate, researchers tracked neuronal activity in the brain of transparent zebrafish larvae (pictured), where they could view different brain areas. Contour lines represent timings of activity during seizures, from earliest firing in red to latest in dark blue: seizures started in areas rich in excitatory neurons (in pink), before spreading to those dominated by inhibitory neurons (in green). While specifics may differ in humans, this zebrafish system could also help identify potentially useful drugs.