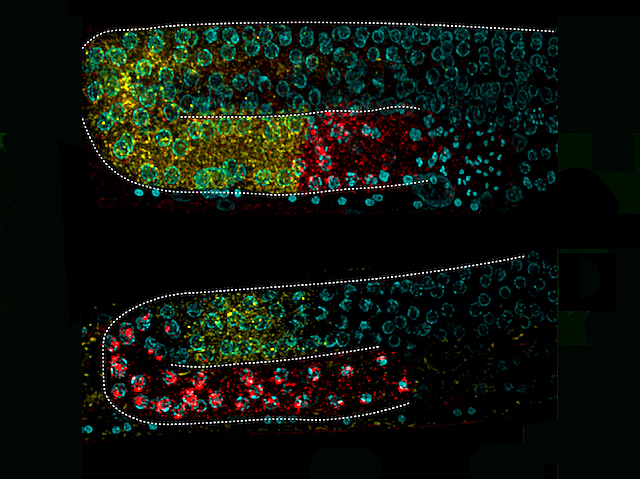 Hidden within our genome are sequences of DNA called transposable elements (TEs) that can move between locations, and potentially disrupt key genes. Our germ cells – precursors of eggs and sperm – have evolved a defence in the form of piwi-interacting RNAs (piRNAs), which silence TEs. But whether piRNAs also silence genes involved in producing germ cells was unclear. Using the nematode worm as a model, researchers found that piRNAs silenced genes involved in sperm formation. In worms with mutated non-functioning piRNAs (bottom), there were more germ cells expressing genes linked to creating sperm (red) compared to a ‘normal’ worm (top). As these worms are hermaphrodites, they need this ‘switch off’ of sperm production to be able to start making egg cells (yellow). This study shows that piRNAs could have wider roles in humans beyond simply silencing TEs.