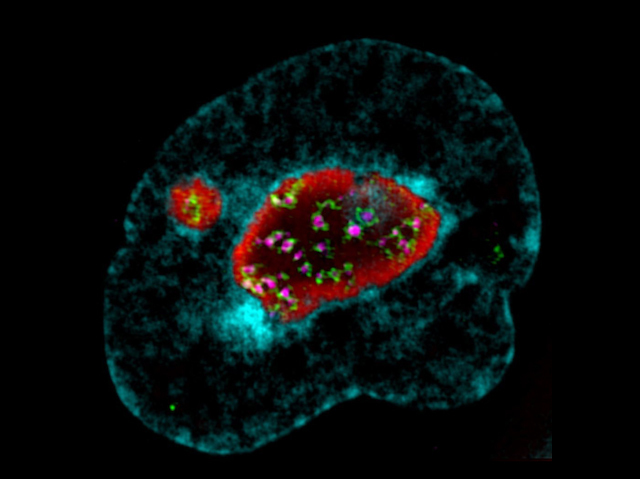 Role of the subnuclear organelle –  the nucleolus – in embryo development

We all begin as one cell which divides into two – but for an embryo to advance further in development, a so-called jumping gene MERVL needs to be rapidly switched off. MERVL is known to be controlled by a factor called Dux, but how Dux is regulated and affects exit from the two-cell stage was unclear. Now, researchers have discovered that the cell’s nucleolus plays a role in regulating Dux. The nucleolus (pictured; DNA in cyan, nucleolus compartments in various colours) is part of our cell’s headquarters – the nucleus – and responsible for making our protein-making factories called ribosomes, and not commonly associated with gene regulation. By disrupting the nucleolus, Dux quickly re-activated, leading to increased levels of MERVL keeping the embryo stuck at the two-cell stage. Not only does embryonic exit from the two-cell stage require genes, like MERVL, to be switched off, the embryo also requires a functioning nucleolus to advance.